Alfred Watkins is best known as the originator of the theory of Ley Lines and his book,  The Old Straight Track, which you can download by the link.

He was born at the Imperial Hotel in Widemarsh Street, Hereford on 27 January 1855. He was the third of the ten children of Charles and Ann Watkins. Charles was a typical Victorian entrepreneur who expanded from the Imperial Hotel to own the Bewell Street Hereford Brewery and The Friar Street Flour Mill. Alfred was educated at a private school situated in what is now the Farmers’ Club. He later told his son that he learnt ‘absolutely nothing’. 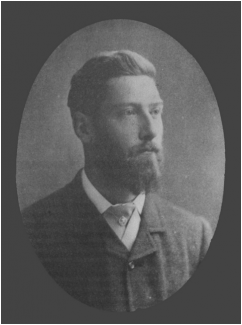 As his father Charles took over various businesses in Hereford he added the tag ‘Imperial’ to them, ending up with an ‘Imperial Empire’ in Hereford to the extent that his daughters were known, behind his back as ‘their Imperial Highnesses’. Alfred started work in the brewery, learning all aspects of the trade from the construction of wooden barrels to brewing and bottling. He then became an ‘out-rider’, travelling the lanes and by-ways of Herefordshire by horse and gig, taking orders for the brewery. After a while he transferred his interest to the flour mill where he was responsible for installing a dynamo giving the first electric light in Herefordshire. His interests in all aspects of milling and bread making was such that he obtained the premier silver medal in the City and Guilds examination in 1883. He also produced a flour which he considered to produce a brown loaf with an ideal spongy, honeycomb texture. This he called Vagos, as the flour was milled in the Wye valley, and the Roman name for the river was Vaga, meaning ‘wandering maiden’.

The Imperial Brewery was sold in 1898 for £64,000 making Alfred totally independent. However, he continued to have an interest in the flour mills for the rest of his life.

Alfred Watkins’s lifelong interest in photography started in his late ’teens with little more than a pinhole camera, developing his wet glass-plate negatives in a small tent before they had a chance to dry.

He soon appreciated that the basic problems in photography were the correct determinations of exposure and development times. To resolve the former he designed a pocket calculator and, determined to succeed, he set up a business to manufacture them adjacent to the flour mill. Success was certainly there — in the first year he sold 1,400 meters at a guinea each. A cheaper, popular version — the Bee meter (a name selected to suggest something small but highly efficient) — sold world-wide, especially after having been used by Ponting in 1910 when taking the unforgettable photographs of Scott’s Antarctic expedition.

Watkins became a Fellow of the Royal Photographic Society in 1910 and was awarded the society’s 11th Progress Medal for his research work. The following year he completed his all-embracing reference work Photography; its Principles and Applications — the ‘bible’ for amateur photographers for a couple of generations. In later life he experimented in colour photography and had a hand-turned cine camera.

Alfred Watkins spent over sixty years photographing events throughout Herefordshire and the neighbouring counties. First by horse and trap, then by one or other of his favourite steam cars and later by his Wolseley Stellite. He travelled to the most remote parts of the county taking photographs of items which caught his interest with his massive plate camera. As a result he published his Survey of Pigeon Houses in Herefordshire and in Gower with line drawings made from his photographs in 1891 and The Old Standing Crosses of Herefordshire, full of his own photographs, in 1930.

He was perhaps more of an antiquarian than an archaeologist but he ensured that fine photographic records exist of many archaeological sites that have since been lost including sections of Hereford’s City Walls, Craswall Priory, St Giles Chapel and many others.

Alfred Watkins became a member on 24 May 1888, Queen Victoria’s 69th birthday. From then on, he regularly attended the Club’s meetings, in Hereford during the winter months and out and about in the County and further afield in the summer. For many years the Club Transactions were illustrated almost entirely by Watkins’ photographs. Rare shots include buildings long since demolished, historic trees and diverse countryside activities.

Alfred Watkins was president of the Club in 1919, when he tried, unsuccessfully, to allow women to become members of the club. Ladies were not admitted as full members until after his death. After his presidential year his retiring address to the members was an illustrated talk on The History of the Honey Bee, another of his many and varied interests.

In politics, Alfred Watkins was a traditional Liberal, against the intrusion of party politics in local elections and strongly in favour Free Trade and of Votes for Women. He became a County Magistrate in 1907 and served on the Bench for many years. In 1914 he became County Councillor for Tupsley and was eventually made a County Alderman. His efforts were responsible for the riverside path below the old General Hospital and, as committee chairman, the design of the War Memorial in St. Peter’s Square.

He was captain of the Hereford Rowing Club for many years and was a founder member of the Hereford Debating Society and of the Hereford Bee-Keepers Association. For the latter he helped provide a horse-drawn ‘bee van’ that trundled the country roads of Herefordshire providing examples of good management in bee keeping, illustrated as night descended, by slide shows.

Decimal currency was proposed as early as 1919, when Watkins, then supported by no less a figure than George Bernard Shaw, produced a booklet called Must We Trade in Tenths? This booklet, selling for 3d., proposed an octaval currency based on the old half-crown.

It was in 1921 that Alfred Watkins read a paper to the Woolhope Club members on Early British Trackways, Moats, Mounds, Camps and Sites. In his talk he introduced members to a new concept — the old straight track; the ley line — prehistoric trading routes based on straight lines between a variety of sighting points. Of great significance, these original markers were subsequently re-used and their sites marked by later, but still historic features. This was a subject that was to occupy him for the rest of his life as he attempted to convince others of his theories.

In rapid succession he published The Ley Hunters Manual, Early British Trackways, Archaic Tracks around Cambridge, and, still in print after some 78 years, The Old Straight Track. In 1926 he helped form The Old Straight Track Club which continued until the mid-1940s; its records are still preserved in the Hereford City Library along with all Watkins glass-plate negatives. His theories are still taken seriously by many and the Ley Hunter magazine is still regularly published.

Alfred Watkins died at the age of 80 in April 1935. in his obituary in the Hereford Times the writer asked ‘who in the city can be unfamiliar with that slightly bent figure: intense, abrupt, hurrying to some business or engaged in animated conversation, oblivious to anything save the object in hand. He concluded that ‘First and foremost he was a Herefordshire Man, as native to the county as the hop and the apple’.

Alfred Watkins - A Herefordshire Man by Ron Shoesmith was published by Logaston Press in 1990 and gives a full account of his life and his publications.