Skip to main content
Main
Menu Current
Section
Home
Important Message: The Club's Autumn/Winter meetings programme is now available on the MEETINGS tab. Please note that the November drop-in day has been postponed due to Covid restrictions - details of the replacement meeting are under the MEETINGS tab, which also has a link to the meeting report for the Ice Ponds visit of 21 August..

In common with many other similar societies formed during the 19th century, the Woolhope Club did not admit women members at that time, though there was no explicit mention of this in the Rules of the Club from 1852. It was not from a lack of appreciation of women's capabilities, as they often supplied historical, botanical and entomological information to the Club and were later recognised by being made honorary members. They were also keen participants in the Ladies' Day field meetings. The restrictions were social; mundane considerations such as toilet facilities may have played a part, also the need for chaperones which persisted well into the 20th century. Men were probably reluctant to admit women to meetings where they could smoke, drink and behave in a manly way without worry. Perhaps they thought that women, traditionally the weaker sex, would be unable to tackle the long field meeting days. The Club cannot be excused from the fact that women do not appear in the list of members until 1954 but perhaps WWII had taught the members something. 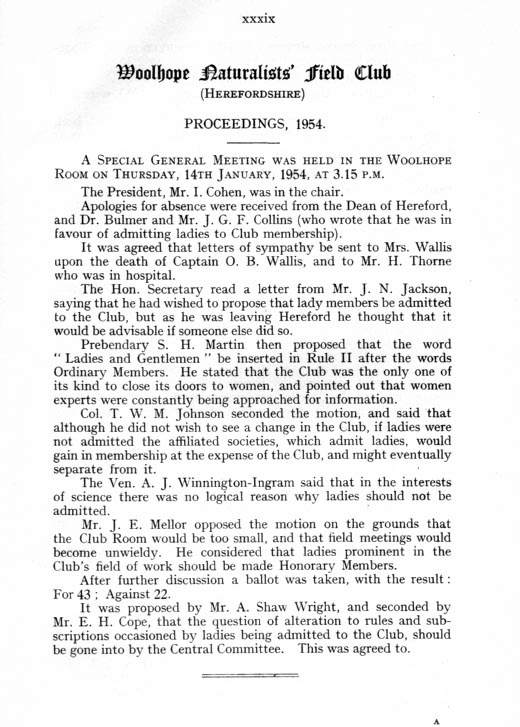