Important Message: The Club meetings for January and February 2020 have had to be cancelled. Please see the President's note under the WHAT'S NEW tab. The 2020 editions of the Club Newsletters &Earth Matters are now available to members via the PUBLICATIONS tab.

The later post-medieval pottery section in these pages is derived almost entirely from the work of David Barker. His important study of this pottery from the Saint Peter's School excavation in Hereford will be published in a volume of Hereford City Excavations. 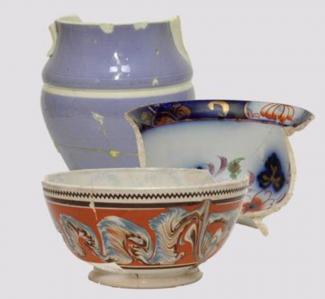 Pottery in the medieval period had been used for jugs and cooking pots and apart from tiles and roof furniture, little else, - plates, bowls, ornaments, were made of wood, pewter or other metal. In the 16th and 17th century Delftware and stoneware had been discovered/invented which was appreciated, presumably from wealthier sectors of society, for ornamental bowls and mugs, to grace the new sideboards and dressers that increasingly were used in houses. It is rarely found however on archaeology sites, and rarely mentioned in inventories. Much more common and dating to the 17th and 18th century is ‘slip ware’, large platters of earthenware with a slip coated decoration. These ‘plates’ were not oven proof, but must have been used to hold fruit, bread or cooked food, or possible also as decoration for the sideboard. These centuries also saw some new types that again reflected changes in houses and habits, posset pots, chamber pots and tygs (two handled cups).

Pottery burst into new forms and patterns in the 18th century due to the habit of tea drinking that spread quickly from the aristocracy to all levels of society. The demand for suitable teawares that followed was the catalyst for factory mass production, indeed the pottery industry was one of the prime movers of the British industrial revolution.

The first coffee house was opened in Oxford in 1650, by 1675 there were 3000 coffee houses in London. Tea was a little later, it was brought to Europe by the Dutch in 1610 and first served in a coffee house in London in 1657. Hot chocolate was introduced about the same time. During the 18th century Britain changed from a coffee drinking nation to a tea drinking nation because the British East India Company had a complete monopoly on the tea trade, other European countries remained coffee drinkers. These expensive drinks - tea, coffee and chocolate, required expensive vessels to drink from and, most importantly, heat resistant ones. Imported Chinese porcelain fitted the bill. The imported wares were quickly copied by home produced ones, first by soft porcelain from the 1740s, then hard paste porcelain from the late 1760s and by bone china from 1800. Stonewares had been discovered a little earlier, in the late 17th century in England, but it wasn’t fine enough for tea (it cracked from the heat) until the Wedgewood factory perfected the technique of fine stoneware with their black basalt wares in the 1750s. Latterly, from the late 18th century, manufacturers were able to make fine tea sets from earthenware, termed cream, pearlwares and yellow wares. These fairly quickly overtook most of the other ceramic types, including imported and home-produced porcelain.

The development through these centuries up to the present day can be traced fairly closely by looking at the style and decoration of the pieces, which in most cases can be located to a factory and decade of manufacture. In Herefordshire the most remarkable thing about them is that nearly all of it is made out-of-county, they were transported here, by packhorse before the railways from the 1850s, from Staffordshire, Derbyshire and Nottinghamshire. This is the case for the fine, teawares and plates. Curiously it is not known where the coarse wares, i.e. earthenware decorated in ‘slip’ style, the flower pots, pancheons and jugs were made. Some may have been made in Herefordshire, though no kilns dating to this period have been found in the county. It is assumed nevertheless that it was made nearer to home, as it is commonly found and the items were large. These types of ware were made from the 17th to the 20th century, and apart from the slip ware, which is 17th to 18th century, they did not change a great deal in style or fabric.
The post medieval pottery pages presented here will help you identify the type, date and place of manufacture of your pottery. It has been divided into six basic categories, but, remember, as you search, most types will fall into two or more categories.