Important Message: A 1577 map of Bringewood Chase, Richards Castle and Ludlow with delightful detail has just been loaded - put 1577, Bringewood and map into SEARCH and download it. Transcriptions of more E 179 taxation records are in the pipeline. See WHAT'S NEW for details

Joshua Cristall was one of the foremost watercolourists of his day. Although most of his life was spent in London, in 1823 he decided to buy a cottage in Goodrich. This was probably mostly on account of his friendship with the Walwyn famil of Hellens. Many of the local pictures he painted are shown in his biography, Joshua Cristall 1768-1847 In Search of Arcadia by John Tisdall, published in 1996. For copyright reasons they can’t be shown here. They are of interest to family historians because they show local people, in the 1820s and often named, harvesting ferns on Coppet Hill, which looms over the village. His cottage, now called Granton House, faces the Hill.

Hereford Museum and Art Gallery have a number of his sketches and paintings, and they can be found also in private collections. They have been photographed and some interesting ones will be shown here.

The tourists who came down the Wye in the late 18th/early 19th centuries remarked on a white-painted building on the crest of Coppet Hill, overlooking Goodrich. This was known as the Folly, and was inhabited until the mid-20th century, although it had no running water or other amenities. A depiction of it by Cristall from his garden has recently been identified – the view has not changed. 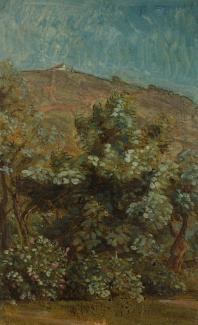