Many years after his death, Woolhope Club member Alfred Watkins is internationally-known for his theories of conceptual 'lines' in the landscape. He considered that they were used for orientation by ancient man and published his theories in The Old Straight Track in 1925. In the book he illustrates his theories with examples of lines drawn on Ordnance Survey maps of the period - see the example to the left of Radnor Vale. The Club has at least one unpublished example of these annotated maps and as found they will be included below.

His theories did not find favour with many Club members as a number of sighting points included church towers known to have no ancient foundations. It was sad because his basic theory, that ancient man navigated by reference to the shapes of hills and other landscape features, is almost certainly true. 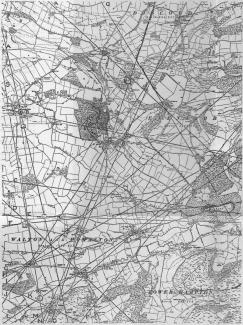