CANALS
The Club has been interested in the history of Herefordshire’s canals from its early days as the problems of their construction had informed the study of geology, one of the Club’s prime interests. The Archaeological Research Section (ARS or WARS) of the Club was formed in the 1960s to study the remains in the landscape of activities including canals. As a result of the ARS’s field visits papers were written for the ARS’s journal, HAN and in the Club’s Transactions. Interest in Herefordshire’s canals spread and a number of articles were written for wider consumption. The articles are part of a series on the subject. Please note that all the material is copyright and must not be used without permission.

1. PREVIEW
This first article on researching the Leominster canal is an introduction to the subject, with suggested locations for investigation and notes on the underlying geology of the route.

2. SURVEYS
The second article reviews the history of the proposals for a canal and the surveys that were done. The technical issues which were solved (mostly) included bridges, aqueducts, feeder streams and sluices.  There are still questions about the choice of route and these are answered at the end of the article.

3. THE LEOMINSTER SUMMIT LEVEL and the PUTNAL TUNNEL
By the end of the 18th century canal surveyors had built up some practical experience of local geological conditions and how to overcome the constructional problems they caused. However, it would be many years before the geology of the area east of Leominster was understood and how this impacted on the canal, e.g. the construction of the Putnal Tunnel near Orleton.  This article analyses problems faced by the engineers. 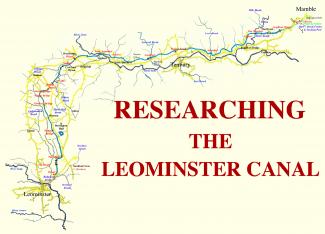 4. HISTORICAL BACKGROUND to TRAMROADS and CANALS
Travellers such as Coxe and Hoare were just as interested in describing industrial activity in Herefordshire and Monmouthshire as they were in historical monuments. This article gives the background to the development of tramways in these two counties and their connection with canals and major iron-working sites such as Blaenavon. The Club’s geologists have explored the high-level tramroad leading to Brynmawr and Nantyglo and found ironstone nodules in Clydach gorge.

5. THE SUMMIT WATER SYSTEM
The regulation of a fairly constant water level in a canal depends on having a system of feeder channels, sluices, water storage and waste water discharge. This article describes the complexity of the natural water courses around Leominster and some of the management systems which kept the canal levels within bounds.

6. THE COMING of the IRON HORSE
The development of railways spelled the end of further canal development, being both cheaper and less costly to maintain. The most suitable terrain for the canals was also suitable for the railway. This article explores the development of the railways in Herefordshire, the personalities involved and the inevitable conflicts.

7. ON THE LEVEL: A HIST0RY OF SURVEYING
This article covers the history of surveying instruments from Roman times until the 1970s, when Woolhope Club members devised their own instrument for surveying archaeological sites. The metric v Imperial measurement complications are also discussed.

8. HEREFORD'S COAL: SOURCES OF COAL IN HEREFORDSHIRE
This article explores the difficulties that the central and northern areas of Herefordshire faced in obtaining coal supplies in the late 18th/ early 19th century. A circular walk around Mamble is suggested where a number of traces of the coalfield can be found.

9. CANAL & COLLIERY
This article has two main sections: a discussion of the physical and chemical properties of coal and their effect on mining and use, then an exploration of the collieries to the west of Herefordshire's Mamble coalfield and in particular Hunthouse colliery.

10. THE CANAL ERA
This short article gives the historical background to the reasons behind canal development both locally and nationally